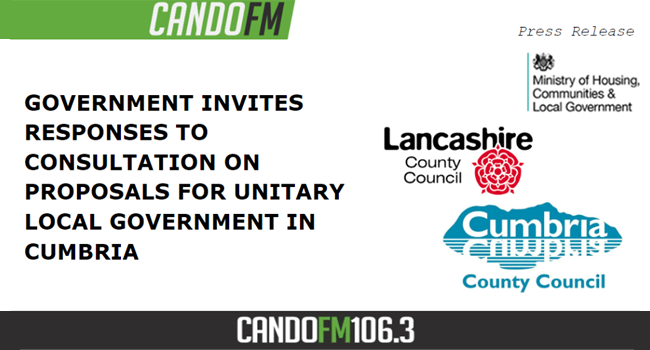 A consultation on locally-led proposals for unitary local government submitted by councils in Cumbria has been launched by Government.

Following a formal invitation from Government last October to councils in Cumbria to submit proposals for reorganisation, the Local Government Secretary has received four proposals for consideration.

As a result of this consultation launch, the district and county council elections due to be held in May this year in Cumbria will be rescheduled to May 2022.

Rescheduling local elections avoids the possibility of the electorate being asked to vote for councils while at the same time they are being given the opportunity to express their views on the possible abolition of those councils. It also avoids members potentially being elected to serve short terms. The elections for local Police and Crime Commissioners, as well as elections to any town or parish councils, will continue to take place in May 2021.

“We have always been clear that any restructuring of local government must continue to be locally-led and will not involve top-down solutions from Government.

“Now that councils in Cumbria have submitted their locally-led unitary proposals, I am pleased residents, businesses and service providers will have the opportunity to have their say on what will work best for their area to offer better value for money and improved services for residents.”

The proposals outline how the councils who have responded to the invitation want to restructure local government in their area to establish unitary local government. This means moving from a two-tier system of county and district councils, to a system where there is a single tier for any given area.

For example, in April last year the county council and four district councils in Buckinghamshire were abolished and the new Buckinghamshire Council took on full local government functions and powers.

As well as Cumbria, councils in North Yorkshire and Somerset have also submitted proposals for unitarisation, which the government is also consulting on.

Residents, councils, Local Enterprise Partnerships (LEPs), public service providers, businesses and voluntary organisations in Cumbria will now have the opportunity to have their say on which proposal, if any, is the best fit for their area.

The Local Government Secretary will consider all proposals following the consultation before making a decision about which option, if any, to implement in each of the three areas. If any proposals are to be implemented, Parliamentary approval is needed before the legislation can be made.

Subject to Parliamentary approval, we would expect any new unitary council to be fully operational from April 2023 with transitional arrangements expected to be in place from 2022 including elections in May 2022 to the shadow or continuing councils.