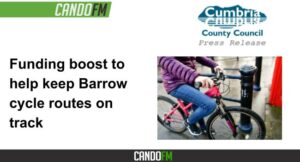 Cumbria County Council in partnership with Barrow Borough Council are delivering a Local Cycling Walking Infrastructure Plan (LCWIP) for Barrow, with an additional boost in funding.

The county council applied for funding from the Department for Transport’s (DfT) Active Travel Fund in August 2021. Initially applying for six schemes in Barrow, Carlisle, and Kendal, the DfT has confirmed that two of these schemes were successful in Barrow.

The following schemes have been successful:

The funding is another success for Barrow since the Active Travel Fund 2 has already funded the schemes on Michaelson Road and Bridge Road, with work underway with an expected completion date of July 2022, as well as the Barrow Town Deal Cycling and Walking projects on Roose Road, Abbey Road, and Walney Road. The county council has also applied for additional funding to conduct a pilot active travel social prescribing scheme in Barrow, with an anticipated outcome in June 2022

Carlisle and Kendal were not successful this time, but there will be more opportunities to bid for funding in the future.

“This is exciting news for the area and for the team that has been working relentlessly on the Local Cycling Walking Infrastructure Plans for Cumbria.”

“We are delighted to have been awarded this funding so that we can invest in Barrow, making the routes more accessible for everyone and encouraging more people to walk and cycle, especially for short journeys in urban areas.”

“We want to encourage people to become more active, especially for shorter journeys, as this benefits our health and wellbeing, both physically and mentally, whilst reducing our carbon emissions.”