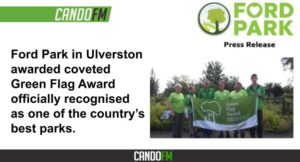 In a record-breaking year, Ford Park is raising its prestigious Green Flag Award today, Ford Park Community Group is celebrating after receiving a Green Flag Award for our Park as one of 2208 UK winners.
The award is the International quality mark for parks and green spaces.
After two years that have seen our parks and green spaces play a vital role for people
through lockdowns as a place to relax, exercise and meet friends and family safely, the news
that Ford Park has achieved the Green Flag Award is testament to the hard work and
dedication of the team that make the green space a great space that everyone can enjoy.
Speaking about the award Jill Salmon CEO of the Charity that manages the park said ”We
are delighted to have awarded Green Flag status again – for the eighth consecutive year.
This award recognises all the hard work and commitment of our staff and volunteers. They
are here come rain or shine, ensuring Ford Park is safe and attractive for the community
and maintained to an award-winning standard”

Commenting on the news that Ford Park has met the Green Flag Award standard, Keep
Britain Tidy’s Accreditation Manager Paul Todd said: “I would like to congratulate everyone
involved in making Ford Park worthy of a Green Flag Award.”
“Ford Park is a vital green space for the community in Ulverston and the surrounding area.
This award is testament to all the hard work of staff and volunteers, who do so much to
ensure that it maintains the high standards demanded by the Green Flag Award.”

Run by the charity Ford Park Community Group, the park offers green open space for
people to enjoy, nature trails, a children’s playground, Victorian walled garden, native
species arboretum, community orchard, heritage orchard and plant nursery. The park is
wholly funded through grants, fundraising and donations.
The Green Flag Award scheme, managed by environmental charity Keep Britain Tidy under
licence from the Department for Levelling Up, Housing and Communities, recognises and
rewards well-managed parks and green spaces, setting the benchmark standard for the
management of green spaces across the United Kingdom and around the world.
A full list of Green Flag Award-winning parks and green spaces is available HERE