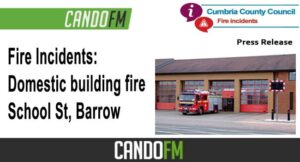 At 11:19 on the 3rd of January 2022, three fire engines attended a domestic building fire at School Street, Barrow-in-Furness. The fire involved an alleyway which had spread to the building. Firefighters used one hose reel jet and four breathing apparatus to extinguish the fire and remained on the scene for approximately two hours.