Fines issued to drivers for not wearing a seatbelt 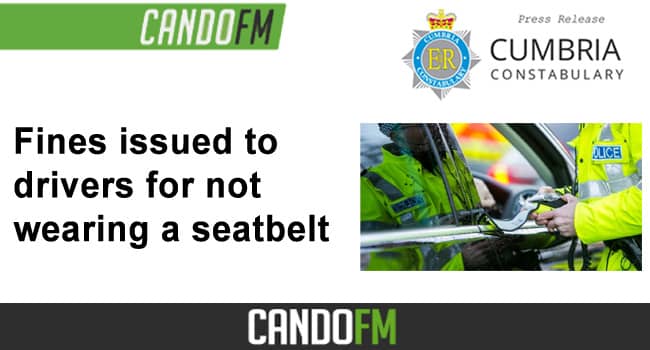 Officers across the force took part in a two weeklong (24th May – 13th June) national operation to tackle drivers not wearing seatbelts.

It is a requirement by law to wear your seatbelt or you could be fined up to £500, you could also face a fine if a child under 14 isn’t in the correct car seat or wearing a seat belt while you’re driving

Across the two weeks officers stopped 64 vehicles with 59 seatbelt offences identified, of those 51 were in relation to the front seats.

Sergeant Lee Hill said “Putting on your seatbelt takes seconds, its concerning to see so many not wearing a seatbelt which saves lives.

“People are aware of the dangers but put their lives at risk as well as the lives of others in the vehicle.

“I hope that those who received a traffic offence report and verbal warning now wear their seatbelts and consider the consequences if they don’t.

“Please wear your seat belt every time you travel in vehicle no matter how far you travel; it could save your life.”

Cumbria’s Police and Crime Commissioner, Peter McCall, said: “Not wearing a seatbelt is one of the Fatal Four in driving.

“The laws around seatbelts are there for a reason – to save lives.

“Anti-social driving is an issue that is consistently raised with me by the public so it’s really positive that the Police are carrying out operations to reduce dangerous driving.

“Not wearing a seatbelt places your life at risk so please wear your seatbelt when you are traveling.”