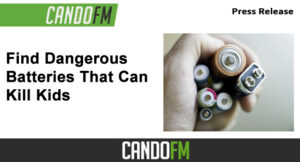 Do you know if you have them?

A new public health campaign launches today encouraging parents to check for dangerous batteries in the home. These ones are small, shiny, and look appealing to children. But they can cause major injury if stuck in a child’s nose or ear, and possibly even death if swallowed.

Today, a new awareness campaign launches encouraging parents – alongside grandparents and caregivers –  in Barrow-in-Furness to check their gadgets for these batteries. They are also encouraged to understand what to do in an emergency situation.

Duracell, who has launched the campaign, has also released a replacement battery – which is covered in the world’s most bitter substance (Bitrex) to stop babies and toddlers ingesting.

As the number of everyday gadgets which need these batteries increases such as digital watches, thermometers, key fobs, and remote controls in our homes, the number of serious child ingestion accidents of button batteries is on the rise.

Over the last two decades, a sevenfold increase in severe illnesses due to button battery ingestions has been reported.

Button batteries can be fatal if ingested. Despite these dangers, research shows that a quarter (24%) in Barrow-in-Furness have found their child playing with one. 39% say that they have no idea where the battery came from. An additional 22% of parents say they have worried that their child has ingested one before.

That said, 66% of parents in Barrow-in-Furness say they wouldn’t know what to do if their child did ingest one.

TW: If a child swallows one it may get stuck in their oesophagus. The consequences of this can be serious: saliva may close an electrical circuit and the cell may release its current, damaging the surrounding tissue. Almost all (90%) of cell ingestions occur due to loose or in-device batteries and if not detected early enough, internal bleeding can occur, which could lead to a fatal outcome in as little as two hours.

Among children who swallowed button batteries, 60% in Barrow-in-Furness took the batteries out an electrical device by themselves.

And parents know they need to do more – over a third (42%) of parents feel they need to make more effort to securely store batteries in their home and over a third (40%) feel they could do more when it comes to making batteries difficult for children to get hold of. It is clear that children can gain access to them quickly and easily – so something needs to be done.

Since the pandemic, many children are spending more time with their grandparents and other caregivers than before. We are encouraging parents, grandparents and caregivers to spend time today to check their batteries, learn what to do in an emergency and, crucially, think about replacing them.

WHAT CAN YOU DO AT HOME