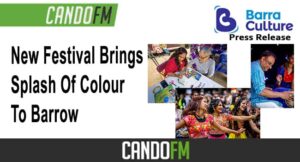 A colourful new festival with diversity at its heart takes place in Barrow this April.

The Festival of Colours on April 2 will see an exciting mix of Indian arts and culture with creativity from Barrow and beyond, culminating in a coloured powder throwing Holi event.

This unique celebration, sponsored by BAE Systems, is being produced by Barra Culture and The Forum(Barrow Borough Council).

The Festival of Colours will champion diversity in the Borough and create powerful connections between people across the area and those from the subcontinent or with Indian heritage.

Barra Culture director, Dr Daniel Tyler-McTighe said: “We are delighted to be partnering with Barrow Borough Council and The Forum to bring this colourful event to the town centre. It’s been brilliant to plan the festival with local people of South Asian heritage and we’re looking forward to contributions from local groups as well as visitors from further afield.”

There’ll be an Indian flavour to the performances, workshops, and food and traditional dance styles including Bollywood and Yakshagana will be accompanied by musicians from Preston Mela and internationally renowned awardwinning company Sampad.

Henna artists will be on hand to create beautiful temporary tattoos, while a Bollywood DJ will be on the decks outside the town hall as a fire-breathing dancer does their thing!

Neeloo Misra is among the Barrow-based residents performing and providing demonstrations.

“I’m so pleased to be working with the organisers to steer the planning and come up with ideas for the Festival of Colours,” said Neeloo, who will demonstrate Indian cooking.

“My friends, their families and I are looking forward to contributing to the day with our cooking, clothing and colourful ideas for celebrating with everyone.”

The festival, which is mostly free, ends with a colour-throwing Holi in front of the town hall where everyone can get messy – and colourful!

Said Daniel: “We think the Festival of Colours will be a brilliant way to kick off a summer of fun.”