Family pay tribute to man who died in B5278 collision 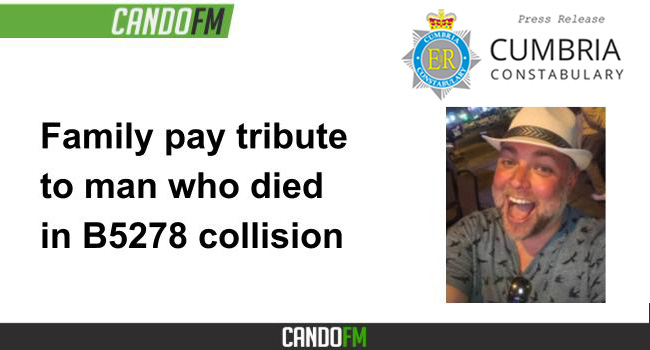 A man who died following a collision in south Cumbria has been described as someone who brought “so much love, joy and laughter” to the lives of those who knew and loved him.

The family of David Hankinson, 40, of Burnley, said the outpouring of support following his death had been incredible – and showed how he touched the lives of so many.

Mr Hankinson tragically lost his life after a collision on the B5278, near Haverthwaite, on Saturday.

He was on a weekend break in the Lake District with his close family and friends at the time.

David was a loving partner to Sionny Williams, devoted father to his two children, Kendal and Alfie, and close stepson to Jules.

Affectionately known as ‘Hanky’ by most of his friends, David was well-known and loved around the local community where he lived, helping others in need and being a support for so many.

He was also a keen local businessman and originally founded the Kenanks burger takeaway on Barracks Road, Burnley, in honour of his late father Ken, who sadly died in 2011.

He also became a business partner in the popular Ballaro’ Italian restaurant located on the same site, opening a Kenanks takeaway and restaurant in Accrington, as well as some other local takeaways.

In a statement, David’s partner, Sionny Williams, said: “The outpouring of support from across the community has been incredible and shows how David touched the lives of so many.

“Thank you to every single person who has taken the time to share their well wishes and special memories. Your kind words bring so much comfort to us during this terribly sad time.

“There isn’t any way of describing the loss we all feel. You were our everything and brought so much love, joy and laughter to our lives. The children and I will miss you deeply every single day.”