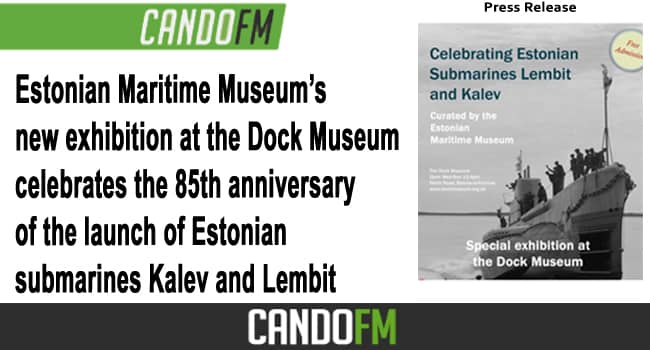 “It is an honour to follow the path of my predecessor, the Estonian Ambassador August Torma who launched the submarines in Barrow-in-Furness 85 years ago and whose wife Alice christened the ship Lembit,“ said the Ambassador H.E. Mr. Viljar Lubi who will open the exhibition on 24 September. „This year we celebrate 100 years of the diplomatic relations between the United Kingdom and Estonia. These submarines were the guarantee of our security before the war and are the symbol of great cooperation between the two countries today.“

The exhibition gives an overview of the story of these two submarines which until today, have been the only naval vessels specifically built for the Estonian Navy. The submarine Kalev went missing in October 1941 on her second sortie, being probably destroyed by a mine in the eastern part of the Gulf of Finland or near Juminda Peninsula in Estonia, but the second submarine Lembit is well preserved and is displayed at the Seaplane Harbour in Tallinn.

“As Lembit is the only existing Kalev class submarine in the world, it is a valuable monument to the technology and military history of both the Estonians and Brits and is certainly one of the main attractions of our museum.“ said Urmas Dresen, the Head of the Estonian Maritime Museum.

The exhibition also includes a short film featuring the submarines during the excercise in 1940, and a 3D model of the submarine Lembit.

The exhibition at the Dock Museum (North Road, Barrow-in-Furness, Cumbria, LA14 2PW) remains open until 8th October. The museum has free admission and is open from Wednesday to Sunday 11am- 4pm. The exhibition was curated byArto Oll, the researcher at the Estonian Maritime Museum.

John Irving, the Premises manager at the Dock Museum said “On behalf of Barrow Borough Council and the Dock Museum it is a great honour and priviledge to host this remarkable exhibition and for us to work with our friends from the Estonian Maritime Museum and the Estonian Embassy“