Drivers face harsher penalties for perverting the course of justice 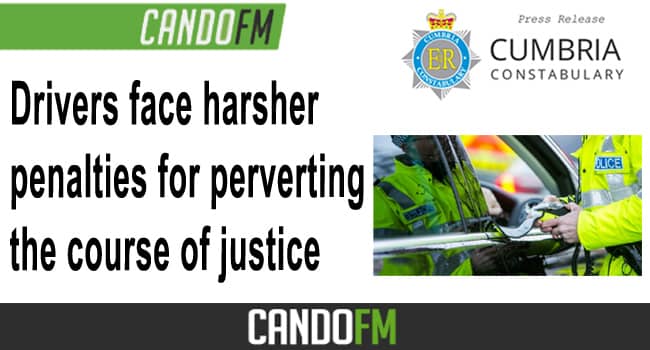 Officers in Cumbria have prosecuted a number of drivers for perverting the course of justice following speeding and other traffic offences.

Cumbria Constabulary has a team dedicated to identifying and prosecuting those who try to avoid prosecution for speeding and other traffic offences. These offences place members of the public at risk on our roads.

Sergeant Callum Young said “We urge any drivers who are tempted to provide false details or information to think otherwise.

“many of these offences could have been dealt with by means of speed awareness course or points and a fine, but their actions have escalated into a much more serious crime.

“Perverting the course of justice is a serious criminal offence which attracts much harsher penalties than the initial road traffic offence.

“We will look to prosecute and bring those who do so to justice.

Some of the recent successes include

Police and Crime Commissioner Peter McCall said “Speeding is a choice and drivers need to understand the devastating effects and risks they put on people by choosing to ignore national speed limits.

“Laws are there for a reason, to protect all people and make offenders face the consequences of their actions. So to abuse this, give a false alibi and pervert the course of justice is, to put it simply, breaking the law and compounds the original crime, it will not be tolerated in Cumbria.

“Drivers who are tempted to provide false details to the police when caught for speeding offences, not only are wasting valuable policing and court time, but also make matters worse for themselves.