Double your donation to The Birchall Trust in the Big Give’s Christmas Challenge 2021! 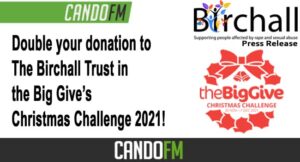 Birchall provide trauma informed counselling and wellbeing support to people affected by rape and sexual abuse – these donations will fund their core work across Cumbria and Lancashire.

Donations to Birchall will be generously matched by Big Give supporters and championed by The Reed Foundation during the campaign meaning your money can support twice as many survivors of rape and sexual abuse.

This year is the first time we’ve been involved in this amazing campaign and we’re looking to raise a total of £2000. In order to access the £2000, we have in the matching pot, we need to raise and additional £2000 in online donations. We hope everyone will give this Christmas generously to help us reach our target and enable us to carry on the work we all feel so passionately about.

How can you get involved?

Birchall is 30 years old this year and was established by Christine Birchall in 1991 as a community response to the lack of support for rape and sexual abuse victims in the local area. It originally operated as an entirely volunteer based organisation supported by community fundraising. The organisation has successfully developed into an established service provider, whilst still retaining its original ethos and local identity.

About the Christmas Challenge

Following a competitive application process, The Birchall Trust has been selected to take part in the Christmas Challenge 2021. You can help us to carry out this work by donating to us in the Big Give Christmas Challenge. All you need to do is visit www.thebiggive.org.uk and donate to our project theBigGiveBirchallTrust from 12pm on 30th November until 12 pm on 7th December.

The Christmas Challenge 2020 raised £20.1 million and is the UK’s biggest online match funding campaign. It offered the supporters of hundreds of participating charities the opportunity to have their donation doubled on theBigGive.org.uk when the campaign went live on #GivingTuesday, 3rd December.

765 charities participated in the campaign this year which supported a huge variety of causes – from small local organisations to large international charities, helping those that need it most, including refugees, children, older people and animals. The Christmas Challenge was launched in 2008 by Sir Alec Reed, founder of Reed Recruitment.

#ChristmasChallenge21 / One donation, twice the impact.

About the Big Give

Match funding is provided by a range of philanthropic organisations, called ‘Champions’ including the Reed Foundation, the EQ Foundation, Candis, The Childhood Trust, The Hospital Saturday Fund, The Julia and Hans Rausing Trust, and many more.

The Big Give is a registered charity (1136547) whose mission is to promote causes and inspire people to give through theBigGive.org.uk, a crowdfunding platform for charities specialising in match funding.

The Big Give features over 10,000 charities and has worked with some of the biggest names in UK philanthropy which provide match funding, including The Big Lottery Fund, Cabinet Office, People’s Postcode Lottery, ICAP TP, Candis Club Magazine, EQ Foundation, The Reed Foundation, The Childhood Trust and others including high-net-worth individuals.

Since being founded by the entrepreneur and philanthropist, Sir Alec Reed CBE in 2007, the Big Give has helped to raise over £156 million for UK-registered charities through online match-funding campaigns. The Big Give’s annual flagship campaign, The Christmas Challenge, is the UK’s biggest online match funding campaign. The Big Give has also run several cause-focused match funding campaigns, including raising £2.6m following the Grenfell Tower fire in 2017 and £1m to support vulnerable children in London during the summer holidays in 2018.

The Big Give is generously supported by reed.co.uk which helps to provide a cost-effective service for both charities aiming to raise funds, philanthropists wishing to leverage their giving and individuals wishing to donate money online.

#GivingTuesday, led in the UK by the Charities Aid Foundation (CAF), will take place on Tuesday 30th November this year.