Dalton man jailed for over seven years for rape 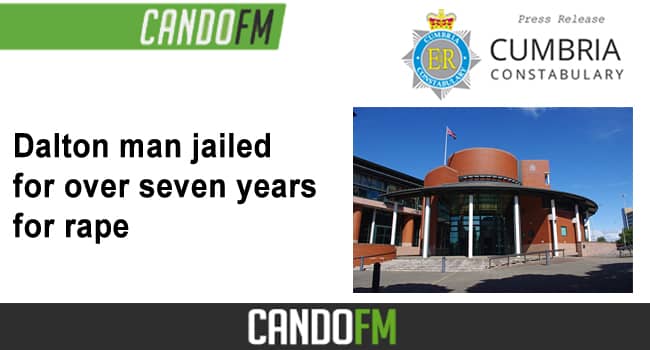 A man from Dalton in Furness has been sentenced to seven years six months in prison at Preston Crown Court for kidnap, rape, and sexual assault by penetration.

Rowley will also be required to sign on to the sexual offenders register.

The female victim cannot be named as she has a lifetime legal right to anonymity.
The offences relate to an incident that took place in the early hours of 18th March 2018 between Barrow in Furness and Dalton in Furness.
During the incident Rowley prevented a woman from leaving a vehicle by striking her, pulling her hair and forcing her to drive him against her will. He then subjected her to sexual abuse within the vehicle.

Rowley was 21-year-old at the time of the incident.

Speaking after sentencing the officer in the case, Detective Constable Matt McFall of Barrow Crime and safeguarding team said “I would like to reassure the public that this was an isolated incident and that no other people were involved.

“It is an understatement to say this was a terrifying and upsetting ordeal for the victim and I really want to make clear my appreciation for her coming forward and trusting the police to deal with her sensitively and professionally.
“Cumbria Constabulary is committed to thoroughly and compassionately investigating all reports of rape and serious sexual offences.
“We will not stop in our drive to bring offenders to justice and hopefully this outcome will help to encourage victims of serious sexual offences to have the confidence to come forward and report it.”

“In delivering guilty verdicts the Jury has given the victim the validation and closure she rightly deserved and I hope she can look forward to the next chapter in her life.

If you wish to report a crime or speak to an officer about an incident, please contact Cumbria Police on 101 or the independent charity Crimestoppers, anonymously, on 0800 555 111.

If you have been affected by rape or sexual assault, contact The Bridgeway Sexual Assault Support Service’s 24/7 free helpline on 0808 118 6432.