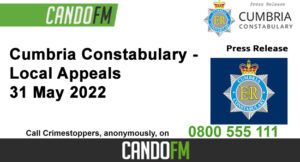 During the early hours of the 28th of May 2022, at approximately 7.30am, in the car park behind Cameron Street, Barrow in-Furness, a man was assaulted by an unknown man, accompanied by an unknown woman.

The victim was reported to have been punched in the face, losing three teeth as a result.

The suspect is described as white and around 6ft tall. He had short blonde hair and was wearing a grey top. He was clean shaven and roughly 30 years old.

The woman who was with him is described as a white, around 5ft tall, of large build, with dark hair and red highlights. She was roughly 25 years old. She was wearing a black top and black leggings.

Officers are appealing for anyone to come forward to try and identify the suspect.

Anyone with information relating to this incident can report online at www.cumbria.police.uk/reportit quoting incident number 107 of 28th May 2022. You can also phone on 101.

Cumbria Police are investigating the report of assault on Glebe Road, Windermere, which took place at approximately 2.30am on 12th April 2022.

It was reported that two men in their 20s were assaulted by another man, suffering cuts and other facial injuries as a result.

A 29-year-old man from the Blackburn area was arrested on suspicion of assault and subsequently released under investigation.

Police are keen to hear from any witnesses who may have seen what occurred.

Anyone with information relating to this incident can report online at www.cumbria.police.uk/reportit, quoting incident number 14 of the 12th April 2022. You can also phone on 101.

Police are appealing for witnesses following a burglary at Subway, Stramongate, Kendal.

The two suspects, believed to be both male youths, entered the store and attempted to take a bottle of pop  from a private area of the store. After leaving they smashed a glass window.

Officers are keen to know if members of the public saw anyone in the area at the time acting in a suspicious manner with a large, heavy object in their hand.

Anyone with information relating to this incident can report online at www.cumbria.police.uk/reportit, quoting incident number 239 of the 2nd April 2022. You can also phone on 101.