Crime reduced by six percent in Cumbria in 2021 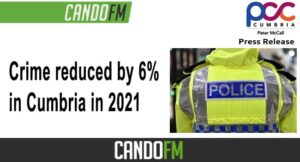 Cumbria’s Police and Crime Commissioner today received an update from the Deputy Chief Constable about the drop in recorded crimes in the county, at his Public Accountability Conference (PAC).

Overall crime in Cumbria has reduced by six per cent in the 12 months up to October, which meant there were 2,149 fewer victims of crime. Offences such as burglary, possession of weapons and violence against a person – all crimes that cause public concern – were among those that went down, as did anti-social behaviour.

During this time demand on the force continued to be significant. There were 239,950 calls into the constabulary’s command and control system, the equivalent of a call every two-and-a-half seconds. Of these, nearly 67,000 were 999 emergency calls, with more than 155,000 non-emergency calls to the 101 line. The rest consisted of administrative calls or calls from other agencies. Emergency calls had a median wait time of 3 seconds. The non-emergency median answer time was one minute and 43 seconds.

People calling into the constabulary’s 101 non-emergency phone line are having their call answered by an experienced officer, reducing the need to make reports in person or at a police station. There were also 46,232 emails and further 10,675 online reports.

Offences including sex offences and hate incidents did increase, but both are offences that are traditionally under-reported, and the constabulary and the Office of the Police and Crime Commissioner, regularly carries out campaigns to raise awareness and increase reporting.

Cumbria’s Police and Crime Commissioner, Peter McCall, said: “I welcome these figures at a meeting where I hold the Chief Constable to account for the force performance, as it is essential to see and truly understand the nature and levels of crime across the county and, more importantly, what is being done to address it.

“It is important to see the detail in the data for crime which dispels many of the myths which can arise from perceptions in social media in particular.

“That said, I do very much recognise that whilst the overall position is good and indeed improving, we do still have pockets of criminality and ASB which need to be addressed and there is no place for complacency.

“Similarly, I would note the much-improved response time for 101 calls but would ask the public to note that there are of course times, recent weather events for example, when call times for non-emergencies can be extended.

“These statistics come against the backdrop of the ongoing Covid-19 pandemic, during which Cumbria Constabulary enforced Government restrictions to assist partners in reducing the spread of the virus to protect all of us.

“The public can be reassured that Cumbria Constabulary have continued to perform strongly and achieve continued best practice in tackling day-to-day crime, as well as continuing to pursue  many initiatives for crime prevention and safeguarding.

“Overall, the Constabulary has done an excellent job in this challenging and unprecedented year. It is without question that Covid19 has impacted on crime levels and the development of emerging crimes, such as the complexity of cybercrimes.

“Cumbria continues to be one of the safest counties to live, work and visit, our crime rates have decreased but of course there is always more to do in order to reduce this even further.”

“There were 2,149 fewer victims of crime in this period and offences that cause great concern to the public, such as burglary and violent crime, decreased.

“This happened in the last year against the continuing backdrop of the pandemic, which led to new fast-changing challenges for our officers and staff during periods of restrictions, while also facing the impact of the pandemic in their own personal lives, like everyone else.

“The restrictions will have undoubtedly had some impact on the number of some offences in this time – but the level of demand is significant, and these statistics demonstrate clearly the high volume of calls and contacts received by the constabulary every day.

“The nature of crime changes as society changes and more offences are taking place online and are of a far more complex nature and therefore significantly more time-consuming.

“In addition, a lot of our demand is not crime-related in the traditional sense but includes our work to protect and safeguard people. For instance, the number of missing people reached 2,941– a rise of 10 per cent.”

DCC Webster added: “Throughout this time we have continued to bring in new developments to improve the service to the public. These include the continued expansion of neighbourhood policing teams in rural areas and there has been continued success in tackling county lines drugs groups and dealing with major investigations.

“Our child-centred policing teams, which are a recent development, increase focus on the early identification of children who need support and intervention to divert them away from crime and anti-social behaviour.

“In terms of the way the public contacts us as well, we have invested in additional officers in our command-and-control system and new initiatives such as our Live Chat functionality, which allows the public to engage online with officers in our control room in live-time without having to pick up the phone.

“I’d like to thank our officers and staff for their ongoing hard work and professionalism this year and also thank the public for continuing to support and engage with the constabulary, giving us the information we need to stop crime happening and keep people safe.”