Crime in Cumbria reduced by 18% in the last year 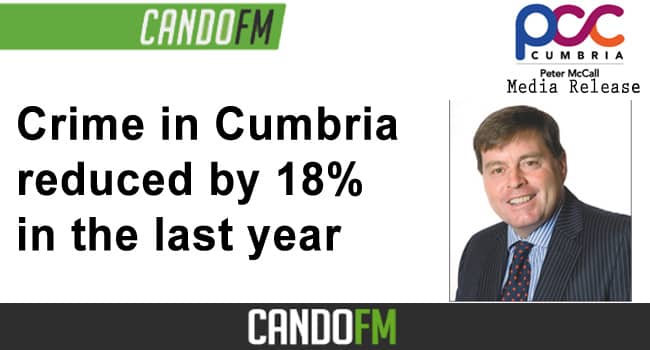 Cumbria’s Police and Crime Commissioner, Peter McCall, received at his Public Accountability Conference (PAC) an update from the Chief Constable about the reduced levels of reported crime in the county on Monday 12 July 2021.

Overall crime in Cumbria was reduced by 18.2 per cent in the 12 months up to April, which meant there were 6,970 fewer victims of crime. Offences such as burglary, theft and violence against a person were among those that went down significantly. During this time, demand on the force led to the constabulary’s command and control system receiving 221,168 calls – the equivalent of a call every 2.4 seconds. Of these, nearly 55,000 were 999 emergency calls, with more than 150,000 non-emergency calls to the 101 line. The rest consisted of administrative calls or calls from other agencies. Emergency calls had a median answer time of three seconds. The non-emergency median answer time was two minutes and 27 seconds. People calling into the constabulary’s 101 non-emergency phone line are having their call answered by an experienced officer, reducing the need to make reports in person or at a police station. There were also more than 32,000 emails received by command and control and a further 10,675 online reports.  More than 10,200 people attended custody – and 8,778 arrests were made. These statistics came against the backdrop of the ongoing Covid-19 pandemic, during which Cumbria Constabulary enforced Government restrictions to assist partners in reducing the spread of the virus to protect our communities.

“Some of this is undoubtedly attributable to the effects of the pandemic and restrictions on movement when the public, including criminals, could not travel around the county freely.

“This meeting gives me the opportunity to scrutinise the force and find out what type of crime has decreased and increased over the past year and, more importantly, what is being done to address these increased figures.

“Crime rates reducing by 18.2% is a significant decrease but I would still urge the public to report any crime they are involved in or witness to 999 in an emergency and 101 in non-emergencies.

“The message remains clear: Cumbria is one of the safest places to live and has a relatively low crime rate and the Constabulary and I intend to keep the public as safe as possible.

“Overall the Constabulary has done a fantastic job over the past 12 months, whilst dealing with a once-in-a-lifetime pandemic, and I know they will continue to do so.

Deputy Chief Constable Mark Webster said: “This past 15 months has seen us all have to respond to rapid changes in our lives in a period like no other – but despite this we have continued to improve our service and we can report there were thousands fewer people falling victim to crime in Cumbria, strongly influenced by the restrictions we have all faced.

“Our officers and staff are members of their communities the same as everyone else and they have had to adjust to the Covid-19 restrictions in their personal lives too – as well as encounter new challenges in their professional careers.

“While on duty they have had to adapt rapidly to the immense challenges of helping limit the spread of Covid-19 while dealing with the everyday policing demands of keeping people safe and preventing and solving crime.

“The restrictions will have undoubtedly had some impact on the number of some offences in this time – but these statistics also demonstrate the high volume of calls and contacts received by the constabulary every day, balanced alongside our commitments to help stop the spread of the coronavirus.

“The nature of crime changes as society changes and more offences are taking place online and are of a far more complex nature than when many of us started our careers.

“Against that backdrop there were 6,970 fewer victims of crime. At the same time, the constabulary has continued with a number of improvements to the service it provides.

“Notable developments include the continued expansion of neighbourhood policing teams in rural areas, which has seen community officers based out of towns where police would previously have had to travel.

“These officers based in local communities are better placed to get to know the issues that matter in their patch and respond to the concerns in these towns and neighbourhoods.

“We continue to have success in tackling county lines drug groups, who both traffic and deal drugs and prey on vulnerable people, with significant sentences handed out at court.

“We have also launched child-centred policing teams, which increase focus on the early identification of children who need support and intervention to improve their lives and divert them away from crime.

“As Covid-19 restrictions continue to lift we do expect demand to rise and offences may go up as a result. However, our officers and staff continue to work hard round-the-clock to deter and solve crime and keep people safe.

“I’d like to thank our officers and staff for their ongoing hard work and professionalism this year and also thank the public for their efforts and patience throughout the pandemic.”