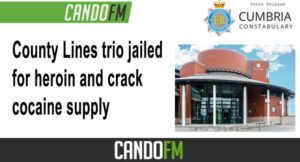 Members of a Liverpool-based organised crime group that trafficked heroin and crack cocaine into South Cumbria have been sentenced at Preston Crown Court.

Daniel Mendes, 21, of Carmarthen Crescent, Liverpool was sentenced to four years and two months in prison for directing the drugs supply operation.

Ryan Mitchell, 46, of Ramsden Street, Barrow-in-Furness was sentenced to five years and seven months in prison for acting as a ‘runner’ and providing his house as a base of operations.

Michael Thorpe, 25, of Yardley Wood Road, Birmingham was sentenced to three years in prison for acting as a ‘runner’ and stock keeper for the drugs.

All three were sentenced at Preston Crown Court yesterday (8 Nov).

The conspiracy, which ran between 29th March and 8th June 2021 and branded itself ‘Mo’, first came to the attention of the police when they raided the home address of David Coward on 19th April, recovering over 200 wraps of crack cocaine and heroin and £1,410 in cash, and arresting Yasmin Ho, Austin Murphy, and David Coward.

On 13th May police raided the home address of Ryan Mitchell, recovering 338 wraps of heroin and crack cocaine and £1,740 in cash, and arresting Ryan Mitchell and Michael Thorpe. Thorpe attempted to escape out of a window carrying the drugs and cash but was quickly detained.

On 8th June police stopped a car in the Merseyside area, containing Daniel Mendes as a passenger. Mendes was found to be in possession of the ‘line’ phone – the phone which throughout the conspiracy had sent out drug supply text messages to south Cumbrian drug users using various different mobile numbers – and was arrested.

“Today’s sentences reflect the hard ‘behind the scenes’ work undertaken by both Cumbria and Merseyside Police to disrupt and pursue the serious and organised criminality flooding our communities with Class A drugs – a trade which leaves exploitation and misery in its wake.

“We will continue to pursue those who seek to profit from the supply of Class A drugs into south Cumbria; those who control this kind of criminality from outside Cumbria will nonetheless attract our attention and are not safe from our reach.”