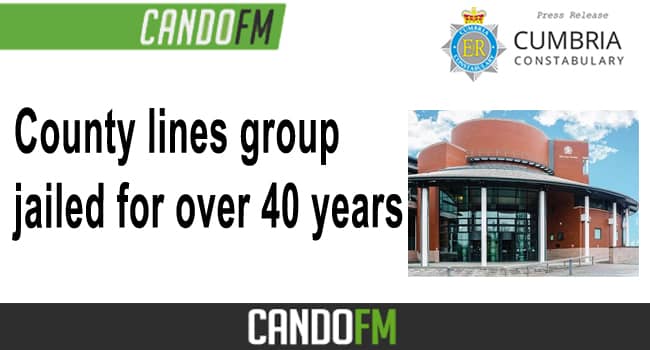 A county lines group have been sentenced after being pursued and successfully prosecuted for supplying Class A drugs in Barrow in Furness. This was a significant operation led by Cumbria Police, codenamed Furtim, targeting members of the group across both Cumbria and Merseyside.

The group appeared at Preston Crown Court over the last two days and were sentenced for their roles.

The court heard how the group were involved in the supply of Class A drugs – heroin and crack cocaine – into Barrow, from Merseyside, between 1 November 2019 and 23 June 2020.

The organised crime group would travel between Merseyside and Barrow on a regular basis to deliver drugs and collect money, whilst recruiting people locally in Barrow, as well as individuals from their home city.

A phone line was used to set up a sophisticated drug dealing operation in Barrow-in-Furness. The phone would be used to send group messages to local drug users at various times of the day, advertising drugs for sale.

A drug user would reply, then be told a location to meet up to buy the drugs.

One key event was on the 19 May, 2020 when officers attended Rawlinson Street where they found Kerry Mallett (previously sentenced for her role) and Liam Benfield.

Benfield was found in possession of 28 wraps of heroin and 5 wraps of crack cocaine.  When officers searched a loft space they located £2,845 cash. Benfield was forensically linked to this cash.

Operation Furtim came to a conclusion on the 23 June 2020 when officers executed warrants across both Barrow and Merseyside.

Officers entered an address in Croxteth Hall Lane, Liverpool where they recovered more than £800 in cash, as well as snap lock bags, scales, white powder, around 3kg of cannabis and a debtors list. This was the home address of Kyle Annett who would later surrender himself to the police.  He had a leading role in this operation controlling, directing and managing the main drugs line.

Police entered an address in Douglas Close, Tyndwall Hill, Liverpool, where they arrested Christopher Williams and Lauren Callister. Around £2,000 in cash was recovered, along with numerous mobile phones and a master list of Barrow drug users.  Williams also had a leading role, controlling and directing on an organisational role from Merseyside.  His partner Lauren Callister laundered the criminal proceeds via her bank account.

Paul McGovern was another significant figure in this investigation acting as a ‘driver’ for the crime group.  He would move people and/drugs from Merseyside to Cumbria.

Matthew Renshall, Leslie Bowers, Mark Walker and Kerri Mallet were the people working on the streets of Barrow either acting as stock keepers for drugs, cash, street dealing or providing their base for Operations.

The investigation culminated in nine offenders being sentenced at Crown Court.

A spokesman for the South Community Serious and Organised Crime Team said: “The Drugs Unit has an outstanding record of disrupting and convicting organised crime groups who set up in the area in an attempt to prey on vulnerable people for profit.

“The team works closely with colleagues in Merseyside to crackdown on these individuals.

“We will continue to relentlessly pursue those involved in serious and organised crime, arrest them and bring them before the courts for sentencing.”