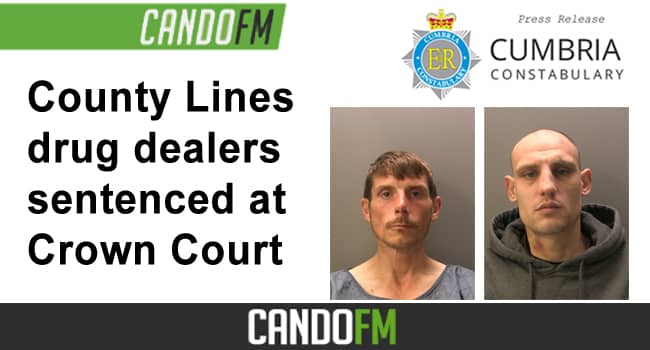 Three people have been sentenced on 1 July for their involvement in a County Lines organised crime drug dealing operation.

The defendants were sentenced at Bolton Crown Court after pleading guilty to Conspiracy to Supply Class A drugs.

The Court heard how the defendants were part of a Merseyside Organised Crime Group involved in Class A drug dealing in South Cumbria.

As part of the criminal enterprise, mobile phones were used to send messages to local drug users in South Cumbria. Once orders received, a local “runner” would deliver the drugs and collect the money, at which point a resupply of drugs is made from Merseyside.

The court was told how Allen acted as the local ‘runner’ and Dougan and Gold allowed their address to be used as a drug dealing base by Allen.

On the morning of 10th September 2019, officers arrested Allen after he was seen engaging in a suspected drug deal in an alleyway behind Egerton Court in Barrow.

Upon his arrest, Allen attempted to place wraps in his mouth but was prevented from doing so. He then dropped four wraps of crack cocaine on the floor, later found to have 78 per cent purity. A further wrap of crack cocaine was found in his pocket, along with a crack pipe.

Officers then entered an address in Egerton Court, the home address of Dougan and Gold.

In total, 626 wraps of heroin and crack cocaine were recovered with a street value of around £3,000.

Also recovered from the address were a large amount of plastic consistent with the packaging of heroin and crack cocaine.

A spokesperson for the South Cumbria Drugs Unit said: “Detectives in here in South Cumbria and across the county are working with neighbouring forces to tackle the issue of County Lines drug dealing head-on – and we are seeing the results of that.

“This is the second significant sentencing of a group involved in County Lines drug dealing between Merseyside and South Cumbria in the past fortnight.

“We continue to urge the community to be our eyes and ears on the ground and to report any suspicions of drug offending to the police immediately so that action can be taken.”