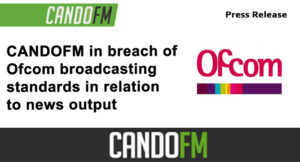 CANDOFM has been found in breach of Ofcom broadcasting standards in relation to news output. i.e. A broadcast that is subject to a commercial ‘sponsorship’ arrangement. Upon learning of a complaint, CANDOFM immediately removed the message likely to confuse listeners from broadcast, pending the outcome of Ofcom’s investigation. Ofcom concluded that in this instance, there was no sponsorship agreement in place. Ofcom acknowledged that Cando FM made efforts to comply with the material, and had considered Ofcom’s guidance. However, by suggesting that Cando FM Local News was sponsored, Ofcom considered the Licensee was confusing listeners and upheld the breach. CANDOFM fully accepts and complies with the decision made by the regulator.