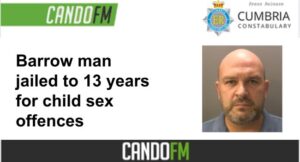 A Barrow man has been jailed for 13 years for committing child sex offences.
Darren Raven, 54, of Victoria Road, Barrow, was sentenced at Preston Crown Court today (10 June).
Raven was found guilty on six counts which included offences of sexual activity with a child under 13 by penetration, sexual assault of a child under 13 by touching, sexual activity with a child and engaging in sexual activity in the presence of a child. The offences all occurred between 2006 and 2010.
Raven was found guilty of the offences following an eight-day trial at Preston Crown Court held earlier this year. Raven was also issued with a sexual harm prevention order with no end date specified and will be entered onto the sexual offenders register.
Detective Constable Matt McFall, Cumbria Constabulary, said: “This successful conviction has been attained due to the unwavering determination of the victim in this case to safeguard other people. It is also important to acknowledge that another woman played a significant role in the successful resolution of this case”
“Raven maintained that he had not committed these repugnant offences, however a jury concluded he was guilty. It goes to show that victims will be believed in cases that occurred a long time ago and justice can be achieved”.
“The CPS, prosecution counsel and other police officers involved throughout this investigation also deserve massive credit for the way in which they professionally handled this sensitive criminal case.”