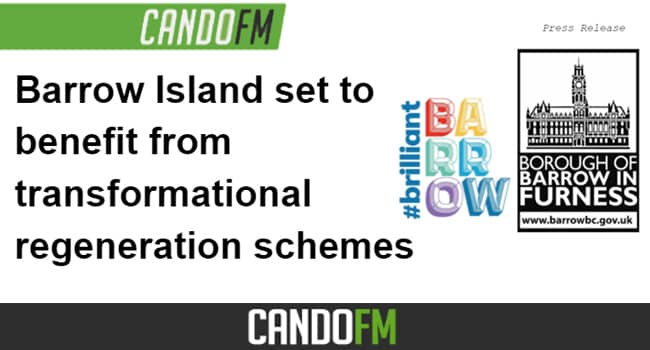 Barrow Island is set to benefit from a series of major regeneration schemes over the next three years.

The area would become home to three #BrilliantBarrow projects under the initiative which aims to transform the town for the future as part of the Government’s £25 million Towns Fund.

Business cases are now being drawn up to support each scheme as part of the official process towards unlocking the promised cash.

The three projects include:

– Barrow’s Learning Quarter: a collaboration between the University of Cumbria and Furness College, which would feature a new university campus in the area of the docks to offer a programme of higher education including degree level courses plus a transformation of the sixth form on its current Rating Lane site.

More than 1,600 people in and around Barrow have already graduated with the University of Cumbria either directly or through Furness College, including more than 360 teachers and 1,000 people in public service such as nursing, health professionals, social workers, policing and more.

This project would widen access to higher education for people across the borough and further afield – something that would provide benefits to residents, employers and the local economy.

– A network of Community Hubs: These hubs would be created to ensure people can access the services and support they need in a way that suits them throughout the whole of their lives.

This project, delivered by Cumbria County Council working with Barrow Borough Council, would include a hub at Bram Longstaffe, on Barrow Island, to enable local people to come together to further build thriving communities.

– A programme of housing renewal: This would see a number of homes on Barrow Island earmarked for improvements by Barrow Borough Council from 2023 onwards.

The work would include the installation of energy efficiency measures, saving up to an estimated 45 tonnes of C02 per year across the whole of the scheme, as well as aesthetic enhancements. Residents living in homes set to be included in the scheme would be contacted directly nearer the time once further details of the proposed works are available.

In addition, Barrow Island would also be served by a separate project from Cumbria County Council to install dedicated cycling and walking infrastructure in the town centre, making active travel an accessible choice for those who live and work in the area.

Councillor Ann Thomson, the leader of Barrow Borough Council and a member of the #BrilliantBarrow Board, said: “This level of investment into Barrow Island really is a once in a lifetime event – particularly when it is through projects of such magnitude that have the potential to create benefits for people across the borough and beyond for generations.

“Each of the seven projects that make up #BrilliantBarrow have the potential to bring a vast array of long term benefits for our communities. But seeing these three major initiatives focussed on Barrow Island as well as new walking and cycling infrastructure could be transformative for this part of our town.”

Barrow was one of the first towns in the country to secure an offer of £25 million from the Government’s Towns Fund last year.

Detailed business cases for each of the schemes will be submitted to the Government later this year. It is hoped final approval on the funding will be granted in 2022.

Steve Cole, Chief Infrastructure Officer at BAE Systems and chair of the #BrilliantBarrow Board, said: “We know there are areas in Barrow where inward investment would make a big difference to communities and businesses.

“Support to help communities thrive will be available through the new hub with home improvements boosting pride in the area.

“Being able to go to university and get a degree or higher level qualification right here in Barrow is going to be a huge step and something that could not only transform the life journey of many individual residents but also broaden our economy as a whole.”

Steve added: “To see these very ambitious projects coming together with Barrow Island as their selected home is simply excellent and a real chance to regenerate this part of our town for the future.”