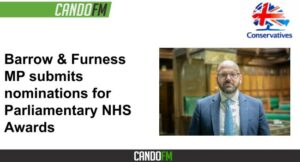 The local MP for Barrow and Furness, Simon Fell, has announced the local health and care workers he has nominated for the national Parliamentary NHS awards.

The NHS Parliamentary Awards launched in 2018 to celebrate the NHS’s 70th birthday and recognise the outstanding contribution of staff, volunteers and others working in the health and care sector. Now in its fifth year, the awards have been an overwhelming success with over 450 Members of Parliament representing constituencies in England nominating an individual or organisation for an award.

So many staff have worked tirelessly to put patients first, and this is something that the awards aim to recognise and reward. As part of the NHS’s 74th birthday this year, the NHS will once again be looking to celebrate those who have gone the extra mile to support patients.

Nominations for this year’s Parliamentary awards closed on the 14th April and Simon Fell has now revealed which outstanding nominees he has put forward.