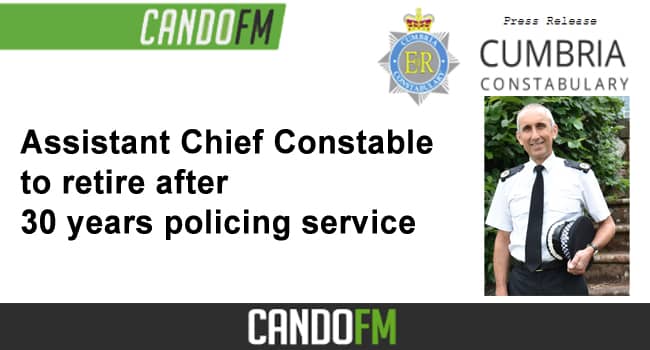 Cumbria’s Assistant Chief Constable Andrew Slattery is retiring after 30 years policing service.
ACC Slattery said: “I am very proud to have served the communities of Cumbria for the last 30 years and I am fortunate to have enjoyed a varied and challenging career.
“I have worked on many of the county’s most significant incidents and investigations over this time, ranging from murder investigations and organised crime to natural disasters and major incidents.
“However, this last year, leading the county’s multi agency emergency response to the pandemic, has perhaps been the most challenging – and certainly something that I could not have foreseen when I joined the job in 1991.
“Throughout my police career, my main focus has always been to protect lives and get justice for victims, which is just as important to me today as it was 30 years ago.
“Retiring was not an easy decision to make, however now is the right time for me, both personally and professionally, to retire from policing.
“It has been an honour and a privilege to have worked with my fantastic colleagues at Cumbria Constabulary and to serve our local communities.”
Chief Constable Michelle Skeer said: “Cumbria Constabulary has been very fortunate to count Andy amongst its ranks for the past three decades and, as he retires, the loss of an officer of such experience, professionalism and integrity will be hugely felt.
“He has successfully led some of the more challenging criminal investigations within the Constabulary as he has been a Senior Investigating Officer and worked within criminal investigation for the majority of his career.
“However, it’s been his most recent service as a chief officer and, in particular, his service to the people of Cumbria over the last 18 months, during which time he led the county’s multi-agency Coronavirus effort, which cannot be overstated.
“His dedication and professionalism during the pandemic have been of the highest quality.
“Andy has been an outstanding public servant, colleague and friend. I congratulate him on his retirement and wish him well for the future.”
Police and Crime Commissioner Peter McCall said: “I would like to thank ACC Slattery on behalf of the public of Cumbria for his dedication to keeping our communities safe over a long and distinguished policing career and particularly for the commitment he has shown in the last 18 months, where he has chaired the Coordination Group leading the response to Covid in the county.
“This has been the most challenging time for everyone and has been exceptional on the demands it placed on our public services; we have been very fortunate to have had ACC Andy Slattery leading the response with his calm, professional and effective leadership.
“Without question Andy Slattery has been the epitome of public service and an exceptional ambassador for the very best of British policing, he will be sorely missed by Cumbria Police and I will certainly miss his straight-talking, honest advice.”