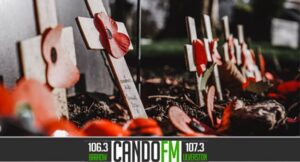 This weekend marks Remembrance Sunday, when people across the UK honour those who have lost their lives in war.

Millions of red poppies are sold each year in the build-up to the day to commemorate the war dead, while the nation will fall silent at 11am in tribute.

Remembrance Day is a national day of memorial to remember and honour service men and women who lost their lives in WW1.

A two-minute silence is held at 11am on November 11, which marks the day the armistice was signed between the Allies and Germany that brought the end of WW1.

It was a tradition first started by King George V in 1919, and initially called Armistice Day.

It was signed in Compiegne in Northern France and forced Germans to evacuate invaded countries within a two-week period.

However, after the outbreak of WW2, many countries changed the name of this day, with some members of the Commonwealth choosing to call it Remembrance Day. In the UK, it is now known as both.

In the UK, Remembrance Sunday is held on the Sunday nearest to Armistice Day and marked by ceremonies at war memorial across the country.

A Service of Remembrance, is held at 11am at The Cenotaph in Barrow Park following the parade which will leave the Town Hall at 10.30am.

In Ulverston the parade will be led by Ulverston Town Band who will depart from the British Legion on Brogden Street at 2.10 arriving at the parish church on Church Walk for a 2.30 service.  Processing back to the War Memorial to lay wreaths at approximately 3.40.
In Askam The Service of Remembrance will be held in the Memorial Garden on Duke Street from 2.20pm.
In Dalton there will be a 9.30am church service at St Mary’s followed by the parade to the War Memorial for 11.00am.

With proud thanksgiving, a mother for her children,
England mourns for her dead across the sea.
Flesh of her flesh they were, spirit of her spirit,
Fallen in the cause of the free.

Solemn the drums thrill: Death august and royal
Sings sorrow up into immortal spheres.
There is music in the midst of desolation
And a glory that shines upon our tears.

They went with songs to the battle, they were young,
Straight of limb, true of eye, steady and aglow.
They were staunch to the end against odds uncounted,
They fell with their faces to the foe.

They shall grow not old, as we that are left grow old:
Age shall not weary them, nor the years condemn.
At the going down of the sun and in the morning
We will remember them.

They mingle not with their laughing comrades again;
They sit no more at familiar tables of home;
They have no lot in our labour of the day-time;
They sleep beyond England’s foam.

But where our desires are and our hopes profound,
Felt as a well-spring that is hidden from sight,
To the innermost heart of their own land they are known
As the stars are known to the Night;