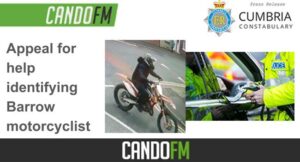 Do you know this motorcyclist?

Their identity is sought by officers following reports of the motorcycle being ridden dangerously in various areas of Barrow this afternoon (7 April), including Risedale Road, Moorfield Street, Lumley Street and Lonsdale Street.

The rider was approached by police this afternoon but failed to stop for them, colliding with an officer in the process, who suffered a lower leg injury and received hospital treatment.

The motorbike is described as an orange and white motocross-style bike and the rider was wearing dark tracksuit pants, a dark jacket with a hood and a motocross-style helmet which is white, green and black in colour.

Police are keen to identify the rider in connection with offences of dangerous driving and failing to stop after an accident.

If you see the motorcycle/motorcyclist, please call 999.

Anyone with information relating to this incident can report online at www.cumbria.police.uk/reportit , quoting incident number 88 of 7 April. You can also contact PC 2631 Rushton-Cape on 101.