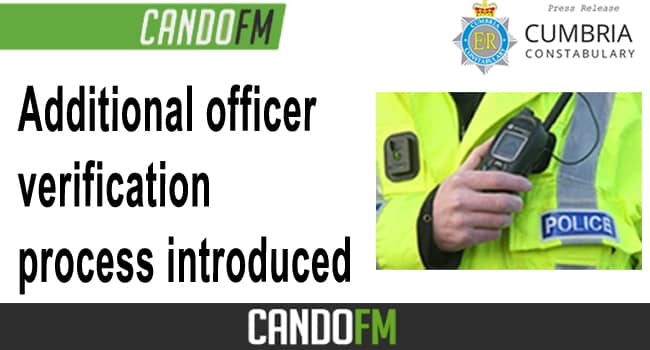 From 7 October, a new officer verification process will be introduced for members of the public who would like to confirm the identity of a lone working Cumbria Constabulary officer they come into contact with.
The introduction of this process is to reassure people who may have concerns about lone officers and the reason for their interaction with them.
As such, all Cumbria Constabulary officers will provide their collar number to anyone who asks and will call the control room on their police radio asking an officer or staff member to confirm their identity, location, that they are on duty and the reason as to why the officer is speaking with them. The officer’s radio will be on loudspeaker so the member of the public can hear the response.
All uniformed Cumbria Constabulary officers are equipped with body worn video cameras and they will also make clear to people it is switched on and recording. Officers are unable to edit or wipe footage from body worn cameras.
In the rare event that an off-duty lone officer is involved in an incident, the officer will call 999 and allow the member of the public to speak to an officer or staff member within the Constabulary’s control room on the phone. Once notified of an incident, uniformed officers will be sent to the scene as quickly as possible.
Chief Constable Michelle Skeer, Cumbria Constabulary, said:
“The facts of how Sarah Everard died has shocked and appalled us all. It is truly horrifying that a police officer could abuse their position and their powers to carry out such abhorrent crimes.
“We fully understand that this has impacted confidence in policing and may also cause concerns for others when they encounter a lone police officer.
“All of our police officers carry a Cumbria Constabulary identification card. However, we absolutely recognise our responsibility to introduce an additional means of verification to provide further reassurance to anyone, including women who may feel vulnerable. This new verification process will hopefully reassure people that when they encounter one of our officers, they are speaking to an officer who is carrying out a legitimate and professional policing response.
“We are a high performing police force, which is testament to the great work done by officers and staff each day to keep people safe. This could not be achieved without the support and confidence of our communities; therefore, I appeal to you all to continue to work with us to keep people in Cumbria safe.”