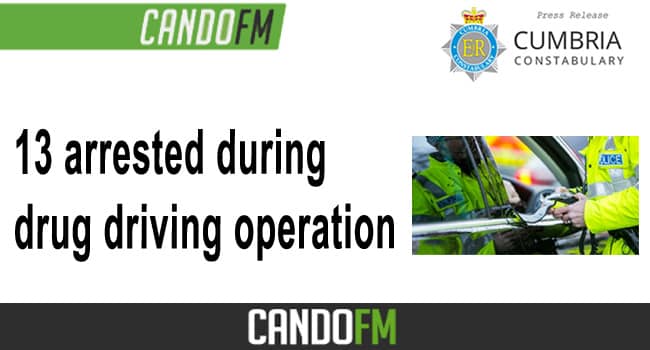 13 drivers have been arrested as part of a week-long operation targeting drug driving, the operation ran last week from 23rd August till the 29th.
The operation which has been run nationally by the National Police Chiefs Council (NPCC) seen officers screen 91 people for drugs with 13 those resulting in an arrest for being over the prescribed limit or unfit through drink and drugs.
Sergeant Martin Bainbridge from the Mobile Support Group said “It’s disappointing to see a significant number of those we screened were positive and they will now face the consequences of their actions.
“Those consequences could have been worse if them choosing to get behind the wheel whilst impaired killed or seriously injured another road user or even themselves.
“Weeks of action such as these are important to raise awareness of the issue of drug driving which doesn’t get the publicity that drink driving gets.
“If you are impaired in any way through drink and drugs please, do not drive.
“If you suspect someone of drink or drug driving please contact us, your call could save their life or the life of another innocent road user”
Cumbria’s Police and Crime Commissioner, Peter McCall, said: “Driving under the influence of drugs and alcohol is extremely dangerous and selfish.
“The 13 drivers that were arrested had not only put their own lives at risk but also the lives of innocent drivers, passengers and pedestrians and they will have to live with this fact for the rest of their lives.
“There is never a good excuse to get behind the wheel of a vehicle while under the influence – even a small amount of alcohol or drugs can affect judgement, lower our inhibitions and reaction time and driving while intoxicated is a selfish and inexcusable act.
“This week long operation is just an example of what the Police do year-round as they are out patrolling our roads and if you drive under the influence of alcohol or drugs you are very likely to be caught, it is not worth the risk.
“The message is clear: drive sober, drive carefully and make it home safe.”