Based on the latest Government guidelines, some events may be postponed, cancelled or taking place online. Please check with the organiser for the latest info. 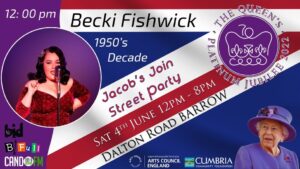 Her Majesty, the Queen’s Platinum Jubilee Event is to be held on Dalton Road Barrow Town Centre on Saturday 4th June. 12pm – 8pm
12:00pm OPENING ARTIST PERFORMING IN THE 1950’s DECADE
BECKIE FISHWICK
Based in the lovely town of Barrow in Furness, south of the beautiful Lake District, Becki has a vibrant vintage style and provides a retro twist to modern songs and revives old jazz, soul and Motown too! Becki’s unique voice is influenced by 1940s jazz, 1950s rock n roll and 1960s soul, a perfect mixture of a wonderful era.
Becki has carved quite an exciting career with singing at vintage festivals and Kendal Calling, also working on tv shows for the BBC with Geri Halliwell and recently ITV with Adam Lambert and Beverly knight, she has also done session work with several Manchester indie labels and a few years back produced and played Amy Winehouse in a sell out show which received the seal of approval from Janis Winehouse, Amy’s mother. In 2019 becki won a top wedding industry award for her outstanding work singing at Lake District weddings.
In 2020 the pandemic hit her career like many others hard, but she took the time to collaborate with others online snd released her own debut single ‘Know You Know’ along side her cover of Charlatans ‘One To Another’ with the permission and praise of Tim Burgess after booking and seeing Becki perform at Tim Peaks diner Kendal Calling.
EVENT LINK
https://fb.me/e/2oh8PKrvf
Now playing: Alan Walker with Faded (PARKX & Jamie Croz Radio Edit)

Other Events this Month